Break away from the beach and inject the wonder of history into your next vacation! Mexico’s ancient past comes alive at archaeological sites around the country that allow you to walk in the footsteps of the inhabitants of highly evolved societies who built pyramids, elaborate cities, and culture rivalling any ancient civilization in the world. Pre-Columbian (the era prior to Christopher Columbus’ arrival in the New World) archaeological sites are true wonders of the world. It’s not everywhere you can enjoy an epic beach vacation and walk back in time over a thousand years.
Every year, Mexico’s National Institute of Anthropology and History (INAH) reveals the most popular historical monuments and archaeological sites in the country.
Luckily, of the top five, many can be visited from your beach resort or cruise port of call.

More than 2 million people visited Mexico’s most famous archaeological and UNESCO World Heritage site this year, making it the most popular historic site in the country. On the Yucatan peninsula, it’s easily accessible from resorts or cruise ports in Cancun, Playa del Carmen and Tulum.
Chichén Itzá is the ruins of a 4 square mile ancient Mayan city that was once home to 35,000 people and was a religious, military, political and commercial center that dates back 1500 years.

The most spectacular remains are of El Castillo (The Castle), a pyramid rising nearly 80 feet above the city’s Main Plaza. The four-sided pyramid has 91 steps on each side, with a top step that combine for a total of 365 steps – the number of days in a solar year. El Castillo is perfectly aligned with compass directions, and during spring and fall equinoxes (the days of the year when there are equal hours of light and darkness), shadows cast by a setting sun create an appearance of a snake on the staircases – reflecting the carving of the major snake god carved at the top.
Chichén Itzá also has the largest ball court in the Americas, a site 545 feet long and 223 feet wide, where Mayans played tlachtli. It was not a game for the faint-hearted, as carvings on the walls show victors holding the severed head of a member of the losing team.
And don’t miss the Temple of the Jaguars, which once roamed the area and whose form is still represented in front of the imposing building.

2. Teotihuacán in the State of Mexico

About an hour north of Mexico City, Teotihuacán is another vast UNESCO World Heritage Site that normally takes top spot on the most-visited list but was edged out by Chichén Itzá this year.
Teotihuacán is even older than Chichén Itzá, with its famous Pyramid of the Sun believed to have been constructed around 200 AD – 300 years before Chichén Itzá. Historically, it may be even more significant. With a population of 125,000 at its peak before 500 AD, it is believed to be the sixth-largest city in the world for its times. Its masterpieces, still standing today, including the Pyramid of the Sun and the Pyramid of the Moon with the Avenue of the Dead joining them, represent the greatest architectural achievements of the pre-Columbian era in the Americas. It’s also anthropologically important in that the city also build complex, multi-floor and multi-family residential compounds.
Don’t miss the sensational murals or the chance to take a hot air balloon ride over the ruins to get a completely different perspective and awe at the vastness of the Teotihuacán site. (Pictured, top)

The 3rd most-visited historic ruins in Mexico this year registered more foreign visitors than Mexican nationals; no wonder since they are so close to popular resorts. Tulum’s archaeological sites are less than 3 miles from Tulum’s town center, less than an hour from Playa, and only one and a half hours from Cancun.
Tulum is the only Mayan city built on a coast – and one of the few protected by a wall, an imposing limestone structure over 2500 feet long and up to 16 feet high. 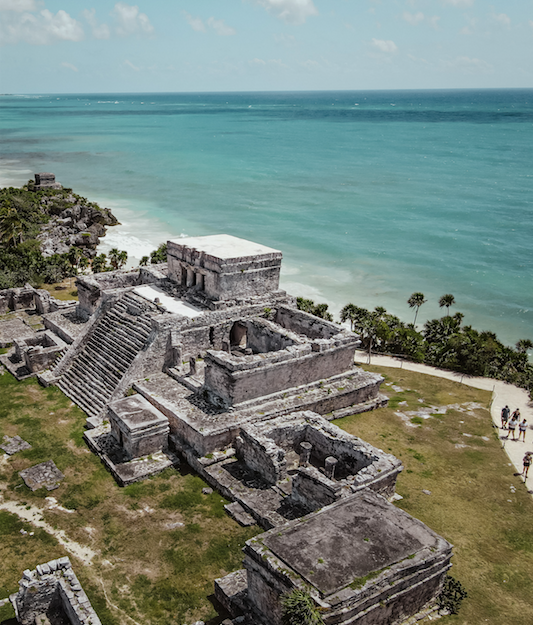 Much ‘younger’ than Chichén Itzá or Teotihuacán, Tulum dates from the 1200’s. The ‘Castillo,’ or Castle, is perched on the edge of a cliff overlooking the sea, thought to have been built as a watch tower. The Temple of the Frescoes is one of the best-preserved buildings with restored murals representing three levels of the Mayan world: the dead, the living, and the gods. Above the doorway of the temple is a figure with a bird’s wings and tail diving – believed to represent a Mayan god who protected the people.

Believed to date from an incredible 8th century BC, Monte Albán is in on high ground in the hills of Oaxaca. The nearest resort area is Huatulco on the coast half a day’s drive away.
Four square miles of the site are occupied by pyramids, temples, terraces, plazas and canals. The Grand Plaza has massive platform mounds at either end, and you can also see a ball-playing court, underground passageways and the most elaborate tombs yet uncovered in the Americas.

Another UNESCO World Heritage Site, Palenque’s historic ruins and surrounding jungle together make up the Palenque National Park, which is home to howler monkeys and jaguars.
The site is 400 miles from the Riviera Maya, so you need a three-day round trip from your beach resort to see a site that rivals Chichén Itzá’s importance, especially as its Temple of Inscriptions, with hieroglyphic writings, attest to the mythology and history of the Mayan people. Palenque is also home to a 160 foot-long canal crossing the city that was the first pressurized canal in the world.
Less than 10% of the site, which dates to 200 BC, has been excavated, so many more mysteries and wonders from Palenque have yet to be revealed.

Images via Getty
All rights reserved. You are welcome to share this material from this page, but it may not be copied, re-published, broadcast, rewritten or redistributed.